Antonio de Pereda was born in Valladolid in 1611 but soon left for Madrid to train in the studio of Pedro de las Cuevas, among whose other pupils were some of the most important Madrid painters such as Francisco Camilo, José Leonardo, Juan Carreño and Juan Montero de Rojas. Pereda’s exceptional gifts as a painter soon earned him the protection of leading figures at court such as Giovanni Battista Crescenzi, Marquis de la Torre, who had an important collection of paintings that allowed him to become familiar with the naturalist style of Caravaggio and his followers. Pereda’s style also reveals the influence of Jusepe de Ribera’s tenebrism, combined with a northern interest in detail. Through Crescenzi, Pereda participated in the decoration of the Salón de Reinos in the Buen Retiro Palace. The premature death of the Marquis de la Torre in 1635 and the animosity that the Count-Duke of Olivares had always felt for him meant that he was excluded from court patronage from this point onwards, as a result of which he focused on religious painting and still lifes. During the 1640s and 1650s he received numerous commissions for large altarpieces in Toledo and Madrid. The success of such works earned Pereda enormous fame and recognition and allowed him to live a comfortable lifestyle until his death in 1678. 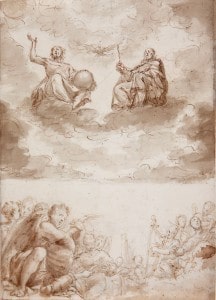 The Trinity and Musical Angels