Eugenio Lucas Velázquez was born in Madrid in 1817. It seems likely that he attended classes at the Real Academia de Bellas Artes de San Fernando. Nonetheless, Lucas’s principal teacher was the Prado Museum where he spent lengthy periods copying works by Velázquez and Goya. The latter had the most influence on his style and artistic personality and Lucas assimilated the Goyesque universe to the point where the works of the two artists have on occasions been confused. 1849 would be a crucial year for Lucas as he executed a landscape for the royal consort, Francis of Assisi, husband of Elizabeth II, and as a result initiated a close association with the Spanish monarchy. This relationship would last for many years and would result in Lucas’s rapid social ascent. In 1850, for example, he received a royal commission to paint the ceiling of the Royal Theatre, a project that earned him the title of Honorary Court Painter, while in 1853 the Queen made him a Knight of the Order of Charles III. In 1868-1869 Lucas travelled around Italy, Switzerland and the Basque Country, travels that are recorded in a series of drawings published by Félix Boix in 1922. This period in the artist’s life coincided with the exile of Elizabeth II. Lacking royal protection and without any major commissions Lucas soon began to squander his fortunes. He died shortly after in Madrid in 1870. 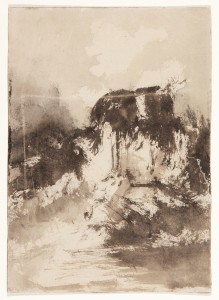