Francisco Gutiérrez Arribas was one of the leading Spanish sculptors of the 18th century. He began his training at the age of seventeen in the studio of Luis Salvador Carmona and in 1749 received a grant to study in Rome. The quality of the works that he sent back from Italy earned him membership of the Academia de San Fernando. In 1763 Gutiérrez Arribas returned to Spain and was commissioned to sculpt small ornamental elements for the new Royal Palace in Madrid. Soon afterwards, in 1767, he was appointed Deputy Director of the Academia’s School. Having gained the confidence of the monarch, Charles III, and of his principal architect, Francisco Sabatini, Gutiérrez Arribas obtained one of the most important commissions to which he could hope to aspire, executing in marble and porphyry Sabatini’s design for The Tomb of Ferdinand VI in the church of the Salesas in Madrid. The majesty and combined richness and delicacy of the forms ensured his entry into Court circles. Together with his Cybele Fountain, a work that was left unfinished on his death, this outstanding monument brought about a radical stylistic change in Spanish sculpture of this period. 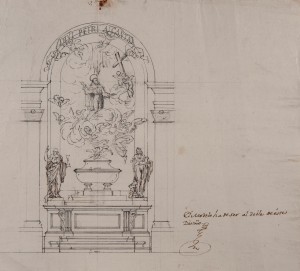