From the age of fourteen, Francisco Ignacio Ruiz de la Iglesia was an apprentice in the workshop of Francisco Camilo (1615-1673), then from 1668 to 1669 was employed as assistant to the Court Painter Juan Carreño de Miranda (1614-1685). He was undoubtedly one of the leading figures in Spanish painting of the late 17th century, producing oil paintings and numerous fresco decorations as well as works in tempera for illustrations of royal Entries and funerals. His style is characterised by a firm, precise line and a mastery of perspective, deployed in dynamic compositions of a decorative nature which are also harmonious within the context of a certain classicism that is evident in a preference for architectural backgrounds and a rich chromatic range derived from Venetian painting. His large altar paintings are all outstanding examples of the decorative and theatrical Baroque style that prevailed at Court in the late years of the 17th century. The mature phase of his career coincides with the last years of the reign of Charles II and the early years of that of Philip V, during which period he obtained the position of Pintor del Rey (1689) and Pintor de Cámara (1701). 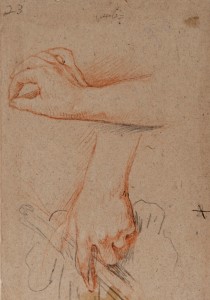 Study of two Hands (recto) / Study of one Hand (verso) 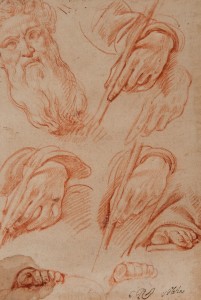 Head, Hands and Feet of an old Man 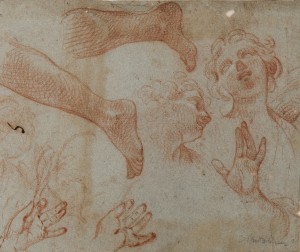 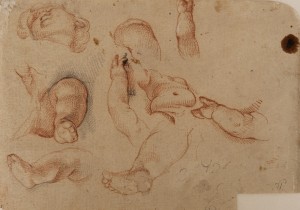