The painter and architect José Jiménez Donoso was a leading figure in the Madrid Baroque school of the 17th century. His life spanned a significant period of transition within the Spanish monarchy as he was born and trained as an artist during the reign of Philip IV, further developed his style during the regency of Mariana of Austria, and reached his mature phase during the time of Charles II. First trained in Rome, on his return to Madrid, where he lived until his death, the artist perfected his technique with Juan Carreño de Miranda, who brought him into contact with Francisco Rizi, constituting the core of the Madrid Baroque school at its height. He thus met Claudio Coello who would become a friend and collaborator on important joint projects. Donoso was a reference point for other, younger painters including Ruiz de la Iglesia, Palomino (who wrote his biography), and Sebastian Muñoz. He worked as a painter, particularly outstanding in mural painting, as well as producing designs for altarpieces and buildings. The artist reached the professional summit of his career when he was appointed Painter and Master of Works to Toledo Cathedral. 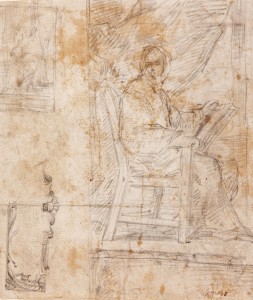 Study for a seated Man