Little documentary information is available on the painter Juan Niño de Guevara and art historians have thus had to make use of the biography of this Andalusian artist written by Antonio Palomino in the early 18th century. According to that author, he was born in Madrid in 1632, moving with his family to Malaga where he entered the studio of Miguel Manrique, a painter of Flemish origins notably influenced by Rubens’s prints. In 1676 Niño de Guevara went to Cordoba to paint canvases for the cloister of the monastery of San Agustín. On his return to Malaga and until his death in 1698 he focused on the production of paintings for the city’s numerous religious houses and churches. Stylistically, Niño de Guevara’s work is closely linked to that of Alonso Cano (1601-1667) but there is little agreement on when contact between the two artists may have taken place. Whatever the case, his surviving works reveal him as a faithful imitator of Cano, to the point where the attribution of some drawings continues to be debated between the two artists. 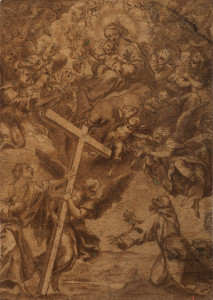