Born in Seville in 1622, Valdés Leal initially trained in the studio of Francisco Herrera the Elder before moving with his family to Cordoba where he encountered the work of the painter Antonio del Castillo, which notably influenced his early works. In 1656 he decided to return to Seville where he remained for the rest of his life with only a few exceptions. In 1660 he was one of the founding members of the city’s Academy of painting, together with Herrera the Elder and Murillo, becoming its president soon afterwards. Palomino refers to a trip made by the artist to Madrid in 1664 with the intention of furthering his studies and of visiting the royal collections and in particular El Escorial. From that date onwards Valdés Leal enjoyed enormous professional success. In 1671 he supervised the temporary decorations for Seville cathedral installed to celebrate the canonisation of Saint Ferdinand, while in the same year he produced his famous Four Last Things for the Hospital de la Caridad. In the final years of his career he produced major commissions for religious houses in Seville as well as the decoration in fresco and tempera of the Hospital de los Venerables Sacerdotes, which was completed by his son Lucas due to the artist’s declining health. Valdés Leal died in 1690 after a prolific career. 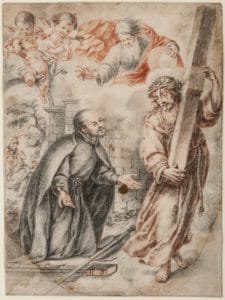