Julio Romero was born in Cordoba in 1874. He was taught painting and drawing by his father, the artist Rafael Romero de Barros, from an early age. In 1903 he moved to Madrid in order to study Symbolist mural painting, under the influence of Puvis de Chavannes. In Madrid the artist soon moved at ease in the city’s cultural circles, taking part in the informal debates at the Café Levante and associating with figures such as Zuloaga, Valle-Inclán, Ricardo Baroja and Gutiérrez Solana, while regularly visiting the Machado brothers’ house. Despite the flourishing cultural ambience in Madrid at this date, he decided to broaden his horizons and travel to England, France, Holland, Switzerland and Morocco. These travels marked a turning point in his career that resulted in the evolution of his style. As a consequence, he was awarded a First Prize Medal at the National Exhibition, the Order of Alfonso X el Sabio and the Gold Medal at the National Fine Arts Exhibition in Barcelona. He was also made an Academician of the Academia de Ciencias, Bellas y Nobles Artes de Cordoba. Based in Madrid, Romero de Torres was extremely active professionally until 1928 when he fell seriously ill. At that point he returned to Cordoba where he died two years later. 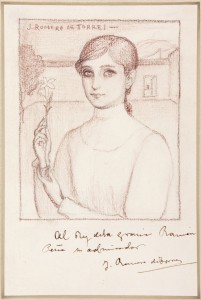