José de Ribera, known as El Españoleto, is one of the greatest figures within the history of art. Despite being considered a Spanish artist, a fact reinforced by his habitual signature, which includes a reference to his place of origin, his training and output can be considered fully Italian and should be interpreted as such. Aside from his activities as a painter, Ribera was one of the most exceptional draughtsmen in Europe in the 17th century. From a technical viewpoint, a number of influences have been suggested. His contacts with Parma at the outset of his career explain the refinement of his drawings in pen and wash. However, it would be in Rome that Ribera fully defined his technique, combining a study of the antique with the academicism of the Roman artists of the day. This explains his interest in analysing the human figure and its proportions and his study of expressions. Also in Rome, Ribera learned how to compose his paintings on the basis of meticulous studies of details of a highly finished nature, the majority in black or red chalk. In 1616 Ribera arrived in Naples possessed of this artistic background. From this date onwards he gradually abandoned a type of highly finished drawing in pen or ink and moved towards increasingly free forms that deployed a rapid, loose line. This development is evident from the 1630s, at a time when his pictorial style moved towards more colouristic and dynamic forms. The culmination of this process of artistic evolution is to be found in works from the 1640s in which the forms become blurred to the point of producing almost expressionist images. 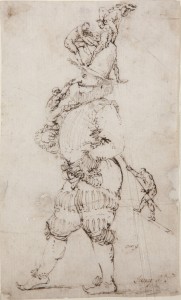