Born in Aguilar de Campoo in the province of Palencia, Matías de Torres entered one of the more modest studios in Madrid at the time when the city was artistically committed to the introduction of the High Baroque style. Through attending academies and his acquaintanceship with Francisco Herrera the Younger, his pictorial style evolved and he consequently started to be associated with these Baroque circles. Matías de Torres was particularly renowned for his battle scenes, while his drawings for the traditional documents that provided proof of noble status brought him some prosperity. In 1679, at his most successful and artistically active period, he joined forces with Claudio Coello and José Jiménez Donoso to produce the temporary decorations for the Entry of Marie Louise of Orléans, first wife of Charles II of Spain. Coello and Donoso made use of Torres due to his previous experience in this field, for example, his notably successful decorations for the celebrations of the canonisation of Saint Rosa of Lima in 1671. In addition, the artist enjoyed the support of Herrera who was at that time Master of the Royal Works and who had previously employed Torres as part of the team that painted the chamber of the new queen in the Alcázar, Madrid. 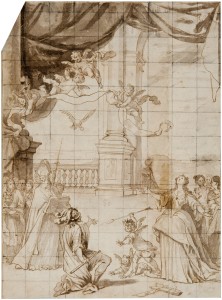