Born in Alcoy, Alicante in 1914, the Civil War unexpectedly caught him by surprise in his home town, where he frequented the more liberal cultural scene such as the “Club of the Misunderstood”, formed by a group of writers and musicians. His affinity with revolutionary ideals made him worthy of various commissions of posters backing the republican side. During the civil war, there are two outstanding activities in Ferrandiz´s artistic trajectory. On the one hand, he produced important works as a graphic illustrator with compositions dominated by highly sculptural and volumetric figures. Secondly, he participated in the Spanish Pavilion at the Paris International Exhibition in 1937, the Republic´s major and largest propaganda operation during the War, in which artists of such importance as Picasso, Miró, Julio González or Alberto Sánchez were involved, and it was there where the Guernica was painted and exhibited for the first time. In the Spanish pavilion, Ferrándiz presents a drawing titled War Clamour (Reina Sofia Museum, Madrid), which depicts in the manner of a Greek frieze, the Republican Spain undergoing a difficult time. His artistic language embraces the classical Ingres style with sculptural volumes and is completely defined during those years of war strife. 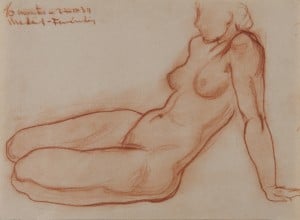