Vicente Salvador Gómez was born into a family of Valencian artists in 1637. He received his first lessons in art in the studio of his father and he furthered his studies by moving to the studio of Jerónimo Jacinto Espinosa (1600-1667), the most important Valencian painter of the day. The first major commission that he received dates from 1663, when he was asked to execute four large paintings on the life of Saint Vincent Ferrer for the monastery of Santo Domingo in Valencia. From that date onwards the artist’s fame increased, bringing more commissions, particularly after the death of his former master in 1667. Over the following years he thus worked for the principal religious Orders, including the Dominicans (1668) and the Jesuits (1670), and for private clients of the importance of the Duke and Duchess of Segorbe. In 1673 the artist acquired from the monastery of the Portacoeli all the books, drawings and prints left there by Alonso Cano. These would provide a source of inspiration for his works and for the instruction of pupils at the Academia de Santo Domingo in Valencia, of which Salvador Gómez was director from 1670. 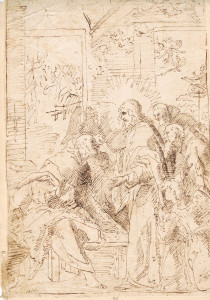