Anton Raphael Mengs was the most famous and esteemed of all Neo-classical painters and the one who exercised most influence on his contemporaries. Mengs was born in Aussig (Bohemia) in 1728. In 1741 he travelled to Rome to complete his artistic education. There he spent most of his youth until 1761 when he was summoned to Spain by Charles III to work on the decoration of the Royal Palace in Madrid. Mengs was appointed Court Painter and exercised a notable influence on Spanish artists, both those working for the Court such as Maella, Bayeu and even Goya, and those studying at the Real Academia de Bellas Artes de San Fernando. Without doubt, Mengs’ work constituted the artistic paradigm to be followed. During the course of the nearly twelve years (from 1761 to 1769 and 1774 to 1776) that the artist was in the service of the Spanish monarch he painted various frescoes for the new royal palace and for the palace at Aranjuez, a considerable number of religious paintings and a very large number of portraits of the monarchy and the nobility, perfectly capturing the appearance and character of his sitters. In 1776 Mengs returned to Rome where he died in 1779. 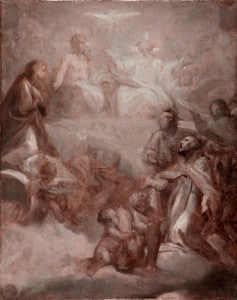 The Holy Trinity in Glory