José Ribelles was born in Valencia, where he was a pupil of Vicente López at the Academia de San Carlos. In 1798 he won the First Class Prize and one year later moved to Madrid to continue his studies at the Academia de Bellas Artes de San Fernando. In 1799, shortly after his arrival, he was awarded a Second Class Prize. This success introduced him into court circles and he made contacts with painters of the status of Goya, with whom he became on good terms. During the French occupation of Spain, Ribelles joined the Santa Julia Masonic lodge, becoming a Master. Following the return to the throne of Ferdinand VII, this activity brought the artist into conflict with the Inquisition, but he avoided punishment by freely admitting his association with the Masons. In 1818, having re-established himself in court circles, Ribelles was appointed an Academician of San Fernando and he also petitioned the King to appoint him Court Painter, obtaining this position in 1819. Ribelles was extremely active during this period, producing frescoes, drawings, designs for stage sets and oil paintings. 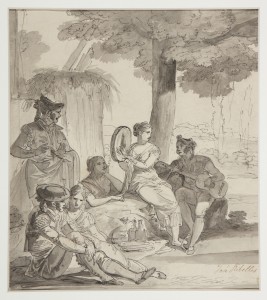 Majos in a Garden 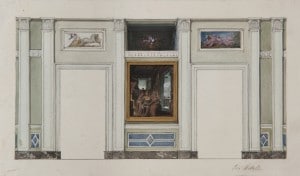