Vicente Carducho was born in Florence around 1576. He arrived in Spain in 1585 in the company of his brother Bartolomé (c. 1560-1608) who moved there to take part in work on the decoration of the monastery of San Lorenzo de El Escorial. Vicente essentially learned his art from his brother and the other Italian painters employed at the monastery. In 1601 both moved to Valladolid where they executed various decorative works for the palace of the Duke of Lerma. Having returned to Madrid, in 1607 he was commissioned to execute several frescoes for the Royal Palace at El Pardo, together with Patricio and Eugenio Cajés, Semini, Castello and Carvajal. In 1609 he was appointed Court Painter, securing more important commissions from that date onwards. The most important commission of Carducho’s career came in 1626 and comprised the series of large-format paintings for the cloister of the Charterhouse of El Paular. The 1630s were also a prolific and successful decade: aside from numerous compositions produced for the most important religious houses in Madrid, the artist’s connections with the Court continued to flourish, working for the Alcázar and the Salón de Reinos in the Buen Retiro palace in Madrid. In addition to his activities as a painter, Vicente Carducho was also one of the leading art theoreticians of 17th-century Spain and his Diálogos de la Pintura were published in 1633. 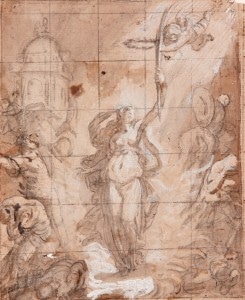 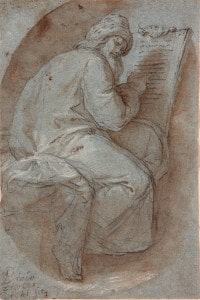 Prophet or Father of the Church (?) 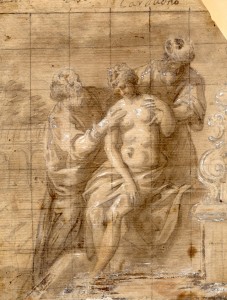 Susannah and the Elders